“The Jagged Edge of Duty” Book

Bob Richardson is the author of “The Jagged Edge of Duty”, a recently published book about P-38 aircrews in World War II.  His particular focus is on the 49th and would be of interest to our members.

On the very first day of the invasion of Sicily, three months into his combat career, Allan Knepper flew his P-38 Lightning fighter in a squadron sent out to sweep the island and interdict German ground targets. Retreating German infantry unexpectedly pounded the American flyers. Knepper was one of two shot down; he was never found. Knepper’s story is the story-in-microcosm of thousands of American fighter pilots in World War II. Richardson recounts Knepper’s experiences from training through combat and uses them to discuss the aircraft, tactics and doctrine, training, base life, and aerial combat of the war. This is the intimate account of one pilot at war, but also the anatomy of the fighter-pilot experience in World War II.

Bob Richardson was with us at the reunion this past May.

This book is also available at these retailers:

On 8 May, 2018 there was a very significant event that continues to highlight our tradition and proud history. This was a Memorial ceremony held in Camarets sur Aigues, a small city just East of Orange, France. The ceremony honored Lt. Donald Tracy, 49th Fighter Squadron P-38 pilot, killed in action 13 August 1944. This is the town where Lt. Tracy’s plane was hit by ground fire and crashed.

We sincerely thank and are humbled by Mr. Nico Courtine whose efforts made the ceremony for Lt. Tracy possible. This ceremony is the latest in a long list of similar events orchestrated by Nico to honor American warriors killed in action during WW II to liberate France. It is also the third ceremony in which your 49th FSA contributed with letters that were read at each occasion. Most noteworthy at every event was the commitment and respect of the French people.

In Nico’s own words:

“I am happy to see that 200 French came voluntarily to gather and honor these pilots. Throughout the ceremony, everyone remained silent, the speech of the mayor and the letters were listened to religiously, with great respect. After the bell to the dead and the American national anthem, all the voices rose to sing together “the Marseillaise” the French national anthem. Sung for your fallen soldiers 74 years ago for our Freedom. Your pilots are our children by the bloodshed on our soil, willing to defend a country and people they did not know, engaged in the struggle of civilizations to defend the free world and its values, out of friendship of a brotherly people and for their Homeland”.

We are very proud to have Nico as a life member of the 49th FSA and to have helped Nico to prepare for this event. Not only did we provide a floral wreath with banner, but in February we located and contacted Karin and Christine Tracy, two nieces of Lt. Tracy. We coordinated with them, introduced them to Nico, and both ladies flew from Vancouver WA to France to represent the Tracy family. Karin prepared and delivered a short speech expressing her deep appreciation. It reads in part:

“…….. It touches our hearts to know that he is still remembered after all these years. On behalf of our family we thank you from the bottom of our hearts on this memorable occasion. It is something we will always remember. Words cannot express our appreciation”. 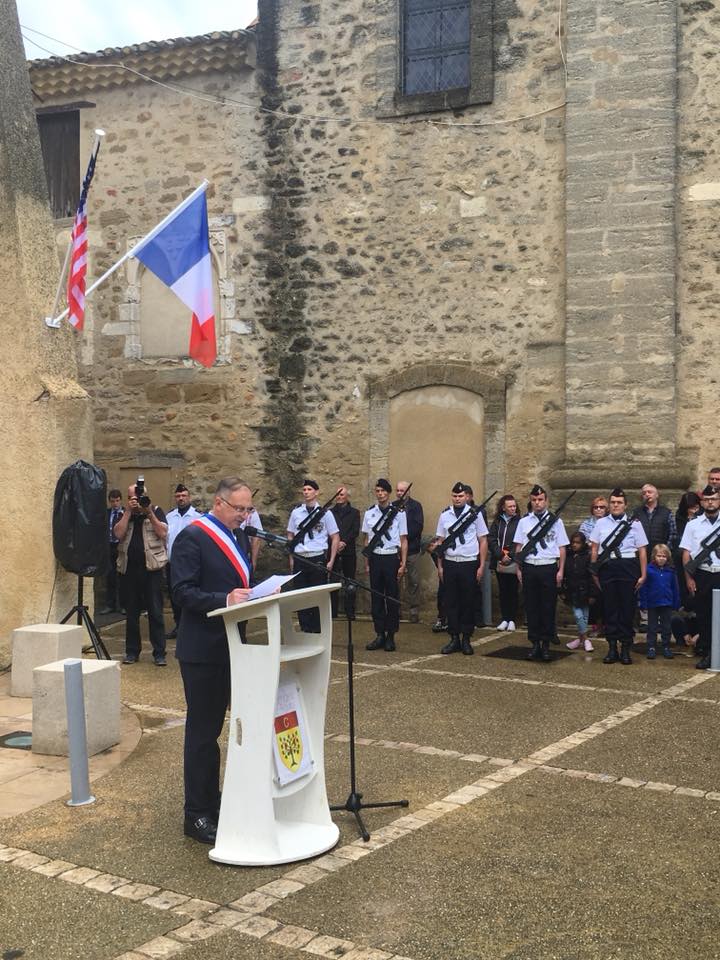 The photos of the ceremony accompanying this article are only a few of the many sent by Nico. Attendees included the Mayor as well as other French dignitaries. The photos tell the commitment of the French people – from dignitaries to children. Their respect and appreciation is apparent.

Your 49th FSA also prepared a letter which was translated to French and was read at the ceremony. Our thoughts were expressed as follows:

We members of the 49th Fighter Squadron Association very much appreciate this honor you bestow on Lt. Donald Tracy. It is truly right and proper to celebrate this occasion for him. Along with many other young men who paid the ultimate sacrifice for freedom, Lt. Tracy’s sacrifice represents the highest level of commitment to the treasured liberties of the French and American people.

This is a splendid ceremony, and perfectly set to honor our fallen hero. However, in time memories of this day will fade, but the sacrifice and commitment commemorated this day will never fade. Not only are these emblazoned on this plaque, they are an integral part of the evolving heritage of our two nations, and well represented here at Camarets sur Aigues. This is a very special place. Throughout history, patterns of civilization were formed, cherished, and nurtured in this region. We continue to live these today, thanks in part to the sacrifices of men such as Lt. Tracy. May God embrace his soul and may God continue to bless France and the United States of America”. 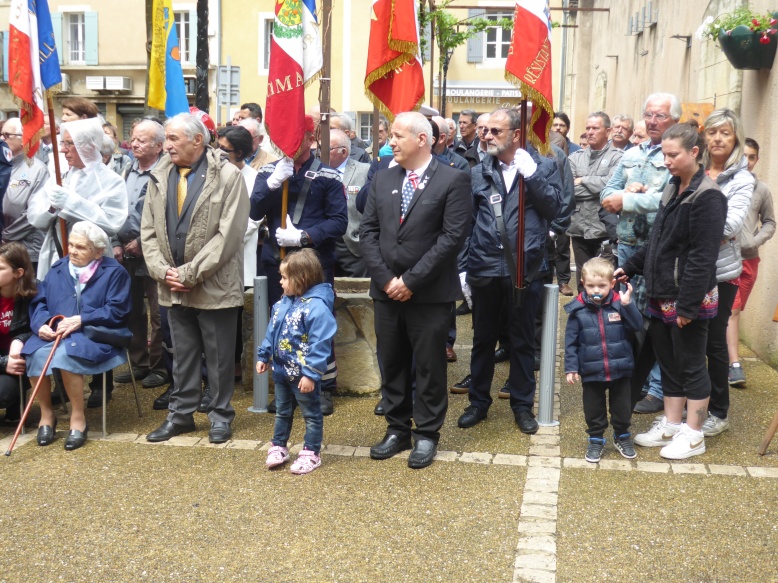 Here is a Daily Mail news article June 2016 to document a Bob & Cathy Elliot’s visit to Harlech Castle Wales to promote extraction and display of his uncle’s  P38F 49th Pursuit Squadron, Sept 1942, which he was forced to ditch. The aircraft was discovered in 2007. 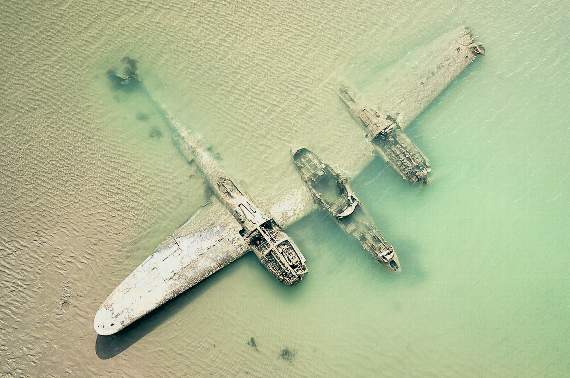